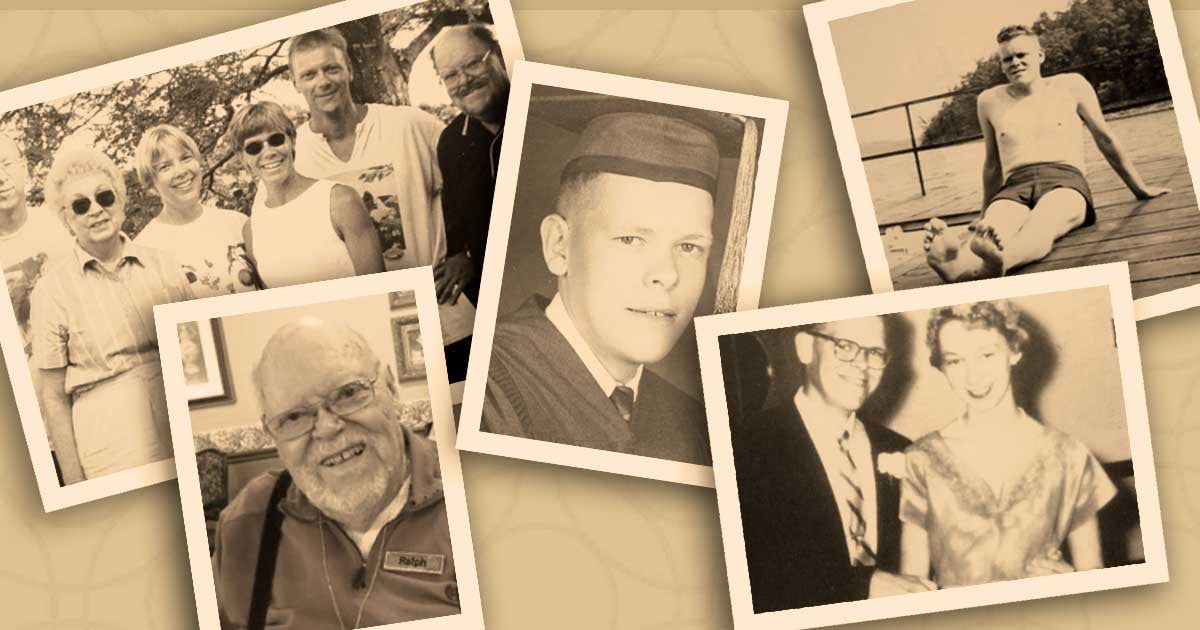 In celebration of Ralph’s 90th birthday, Richard Pierce tells us a bit of his father’s life.

Ralph Pierce was born on Oct. 21, 1931, in Rockford, Illinois. His parents were Ray and Ellen Pierce; Ralph was the fourth of their five children.

When Ralph was a boy, he lived near a vacant lot and threw a baseball or football with friends. They formed a neighborhood baseball team and built a diamond with a backstop made of boards and chicken wire. They played another neighborhood team with a boy who was so much bigger and stronger than everyone else that they demanded proof of his age. It turned out that he was their age, but Ralph caught him coming up to bat every fifth or sixth batter.

In junior and senior high school, Ralph had the lead in several plays, including as Doctor Hackett in The Late Christopher Bean, and he also did theatre in college. His acting career was put on hold while he raised a family and had a career. He has enjoyed acting again at The Birches, playing three roles in Fibber McGee and Molly and Jack Benny in A Jack Benny Christmas.

Ralph graduated from the University of Wisconsin with a Bachelor of Business Administration degree in 1953. He was an excellent student and earned the Phi Beta Kappa Key. His first year, he attended on a scholarship from West High. Tuition was around $250. The last three years, he was able to procure $175 scholarship money from a state representative.

Each representative received one scholarship to give to a deserving recipient, usually an athlete. Ralph wrote every state representative and finally got one to sponsor him. To make up the difference, he worked in the cafeteria for $.57 an hour, then as a pinsetter in the bowling alley for $1.27.

Ralph was in the ROTC at West High School in Rockford. He served in the Army Medical Service Corps from 1954 to 1956, spending one year in Korea.

Ralph married Virginia Bergeron on June 13, 1953. They lived in Rockford, Chicago, and Park Forest before buying their first house in Hinsdale in 1960, and it was near a train station so Ralph could commute into Chicago. He was an investment banker specializing in municipal finance, and he retired in 1998 from Shearson Lehman.

Ralph and Virginia became residents of The Birches in February 2014, and Virginia died in July 2016. Ralph and Virginia were always very active in their community. They served in many roles at Christ Lutheran Church, and Ralph was a volunteer with Good Samaritan Hospital and Meals on Wheels.

Ralph was an avid golfer. He also enjoyed gambling junkets to Las Vegas and would gamble while Virginia went to shows; now, he enjoys Blackjack at the Birches. He is a lifelong sports fan, starting with the West High Rockford Warriors and the Wisconsin Badgers. He roots for all the Chicago sports teams except the White Sox and had season tickets to the Bears and Blackhawks for many years.